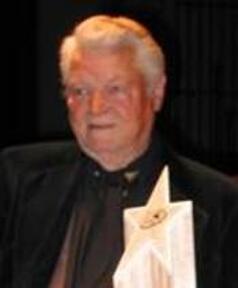 Claude King was born February 5, 1923 on a farm near Keithville, Louisiana in what is now suburban Shreveport.  He formed a band with Buddy Attaway and Tillman Franks called the Rainbow Boys, and they started playing around Shreveport in their spare time.  In 1942, Claude joined the Navy and served in World War II.  Upon his discharge, he went to business college and after graduation he went into construction work while continuing to play music on the side.  He re-formed the band with Buddy and Tillman, and they made a recording for the small President label, Flying Saucers b/w I Want To Be Loved, a Bailes Brothers song which later became a hit for Johnnie and Jack.

When KWKH launched the Hayride in 1948, Buddy and Claude became cast members.  By this time, Tillman was managing Johnnie and Jack and Kitty Wells, and he would go on to manage many other greats including Webb Pierce and Johnny Horton.  Claude made his first solo recordings for Pacemaker and Gotham in the early 1950's.  In 1952, Kitty Wells recorded one of Claude and Tillman's songs, A Wedding Ring Ago.  Claude also wrote That Heart Belongs To Me, which Tillman bought from him and gave to Webb Pierce...and it was a hit for Webb twice, in 1952 and again in 1957.

During his first stint on the Hayride, Claude worked one of Hank Williams' last tours, as his driver and opening act.  Throughout the early 50's, he toured around the Shreveport area with Johnny Horton, who had become his closest friend...but they spent more time hunting and fishing together than on their music.  Claude recorded a session for Dee-Jay Records in 1957, but shortly thereafter he got out of the music business and worked in construction full time.  But he continued to write songs, some of which were recorded by Johnny Horton, such as She Knows Why, Take Me Like I Am, and I Don't Like I Did.

Claude signed with Columbia in 1961 and his first single, Big River, Big Man, climbed to #7 on the country charts.  The follow-up, The Comancheros, also reached the top ten.  Both were also minor pop hits.  Then, in 1962, came Wolverton Mountain.  The song was written by Merle Kilgore and was inspired by his uncle, Clifton Clowers, who lived on the mountain in Arkansas.  Merle had pitched the song to everybody he could think of, and nobody wanted to cut it.  Claude made a few changes to the song, recorded it and it reached the #1 position on June 30, 1962 and stayed there for 9 weeks.  It also reached #6 on the pop charts.  Suddenly, Claude was much in demand and was booked on national television shows such as Dick Clark's American Bandstand.

The next hit was a Johnny Horton-styled historical saga The Burning of Atlanta, followed by I've Got The World By The Tail, Sheepskin Valley, and Building a Bridge.  In 1963, Claude and Tillman parted ways and there was a rift between them for many years, but later in life they renewed their friendship and were neighbors in south Shreveport.

Although nothing came close to equaling the success of Wolverton Mountain, Claude was a consistent presence on the charts for the next decade with such songs as Hey Lucille, That's What Makes The World Go Round, Sam Hill, Tiger Woman, Little Buddy, Catch A Little Raindrop, Little Things Every Girl Should Know, and Laura (What's He Got That I Ain't Got).  In 1969, he recorded a tribute album to Johnny Horton, which he had always wanted to do.  "All For The Love Of A Girl" was released as a single, and it charted in the top ten...his last song to do so.  But the hits continued with Friend, Lover, Woman, Wife, I'll Be Your Baby Tonight, Mary's Vineyard, and Chip 'n' Dale's Place.

Claude's contract with Columbia lapsed in 1973.  The following year, he cut a session for Cinnamon Records, but the label subsequently went under.  From there, he went to True Records, which released three singles and an album, and then Gusto, which released an album.  His last chart entry was Cotton Dan in 1977.  During his  career, Claude also appeared in two feature films, Swamp Girl and Year of the Yahoo.  He continued to do personal appearances for a few more years, but by the mid 1980's he retired from the music business.

He continued to live in Shreveport until his death on March 7, 2013.  He is survived by Barbara, his lovely wife of 67 years, sons Duane, Bradley and Jay, and six grandchildren.