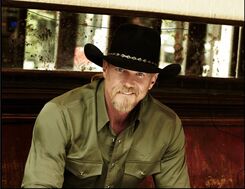 Trace Darrell Adkins (born January 13, 1962) is an American country singer and actor.  A native of Sarepta, Louisiana, he has done many things during his life. Though perhaps best known for his bass-baritone singing voice, he’s also an actor who’s appeared in numerous movies and television shows. His unmistakable voice can be heard doing voice-over work on television and radio commercials as well as the character Elvin on King of the Hill. He’s also the spokesman for organizations like the Louisiana Farm Bureau Federation and the Wounded Warrior Project. He was the 2013 winner on The All Star Celebrity Apprentice. He’s even written an autobiography and worked on an offshore oil rig.

Trace learned to play the guitar at an early age and started singing at the age of 16 with a church quartet. He sang bass in a quartet named The New Commitment. They traveled to churches in North Louisiana and also performed for the governor in Baton Rouge in the early 80s. He spent several years honing his musical style in bars and clubs around the ArkLaTex before moving to Nashville. His professional country music career began in 1996 with the release of his first album. Since then, he’s released more than 20 studio and compilation albums, some of which have gone gold or platinum, and he’s charted more than 20 singles on the Billboard country music charts.
More about Trace Adkins